This post was originally written in August 2011. This is something that I wrote a few years back.  With all of the storms that have been beating up New England in the last couple of weeks…  well I decided to repost it.

Growing up in northern New England, we are used to having massive winter storms.  I learned from my parents at a very young age about being prepared.   The preparations for an upcoming storm typically included making sure that there was “Blizzard” food in the house (milk, cereal,bread, etc… especially with 4 children) and the vehicles were gassed up.  It’s not that we weren’t going to be able to get out of the house for months after the storm, as usually within 8 hours after the end of the storm, we would be out and about.  But then again, you never know. (In December 2010 a freak ice storm resulted in 14 days without power for 100’s of thousands of folks – never know)  Mom and dad were always prepared.

Well, over the last few days, we’ve been warned that a hurricaine is headed up the east coast.  Now I am certainly far enough away from the coast that I know we would never bear the brunt of a hurricaine.  But….  with “big rain” and alot of strong winds and a home surrounded by trees, well it was time to be prepared for the storm.

So, I very dutifully made sure that I packed in “hurricane” food, extra canned groceries and a couple bags of ice for the freezer.  The day before the storm, I made sure my entire house was clean.  Every piece of laundry was done – folded, ironed and put away.  I was up early the morning the hurricane was expected to come through – showered and dressed, breakfast and dishes done and Sunday dinner put on before 8:00 AM (something that would be cooked early and could be eaten cold if need be).  Then I set about gathering the candles and lighter and flashlights, so that I would know where they would be. My final step was to fill the bathtub full of water.

There, I was ready – bring on the storm.  And on it came.  Alot of rain, and I do mean alot… but thank you Jesus, we live on sandy soil so it drained quickly.  As for the power, well it flickered off and on a few times, but never went out for more than a minute.  So today, the storm has passed, the tub is drained and it’s an amazing day to sit outside and read and write.  I don’t see myself as a pessimist, but I have to wonder if I wasn’t ready….???

Like most of you, I’ve been through some pretty intense storms in my life.  I’ve been tossed around by what seemed like hurricane force winds, and up to my nose in the flood waters till I thought I would drown.  But yet every time the storm would rage against me and toss me here and there for a while… well I never did drown in a single one of these storms.  Sure being battered around for a while left me a little bruised, but they never knocked me all the way down.  Each time, I got back up – stronger and wiser. 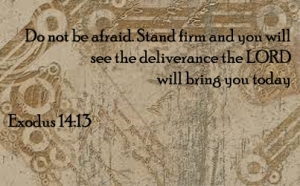 I also know that I don’t battle those storms in my own power.  There is no way that I am strong enough to battle widowhood, financial ruin, an abusive relationship, murder of a family member and a cancer diagnosis on my own.  Through every raging storm that came my way, I stayed focused.  I am so not perfect, I’m not saying that I didn’t lash out at God, ask why me, get mad, get angry and for a short time just throw up my hands in disgust.  I did.  But God didn’t take it personally.  He knows that I’m just a fragile human woman.  I don’t have divine wisdom and knowledge of all things.  But what He also knows is that I am His child.  He knows I will get over my hissy-fit and run to Him to hide in His shelter.  The only shelter that will keep me from being too badly battered and bruised.  The shelter that will keep me from drowning.  When the raging waters may rise to where I feel like I might drown – I can raise up just a bit more to lift up and stretch towards Him and hang on for just a while until the storm waters recede.

There are storms and there are storms.  There are natural storms.  And we all know that nature in all its fury can rage all around us and there isn’t much we can do but to prepare and ride it out and when it’s over, we pick up and clean up, survey the damage and move forward with our lives.

And then there are the storms of life – we usually have no warning, no week or even a day to prepare.  The storms of life require a life that’s prepared.  We have our anchor securely fastened to the Rock so that we aren’t blown around by the storm.  We have our head and eyes looking up and focused on Him so that the rising waters can never reach to high to drown us.  The food we pack in ahead of the storm is the life sustaining word that we feed on daily.

The storms of life are always going to happen, nothing is going to change that, that why it’s called life.

How we see ourselves during those storms is what is going to mean the difference between being swallowed up and drowning in the flood waters and surviving the storm.